August 15, 2020
Theanna’s baby was getting married.  She spent the entire week before the wedding on an emotional roller coaster. It seemed like Sarah was only born yesterday and now she was grown up and getting married. Theanna says she was crying off and on. She was up and down and was a self-described “basket-case,” but in a good way.

Theanna was diagnosed with ALS in 2018.  She had just fulfilled her lifelong dream of becoming a clinical psychologist. But with her diagnosis, she could no longer work. Her brother stepped up and she moved in with him.  And her daughter, even with Covid-19 and all other restrictions, moved up her wedding to make sure her mother didn’t miss it.  But Theanna was worried about being able to cover the cost of attending.  So she reached out to Team Gleason for help.  The two hour car ride would exhaust her, so she wanted to get there a day early so she could enjoy the wedding.  She also asked for help getting a hospital bed and Hoyer lift so that she could rest comfortably.  We were thrilled to be able to step up and make it happen. 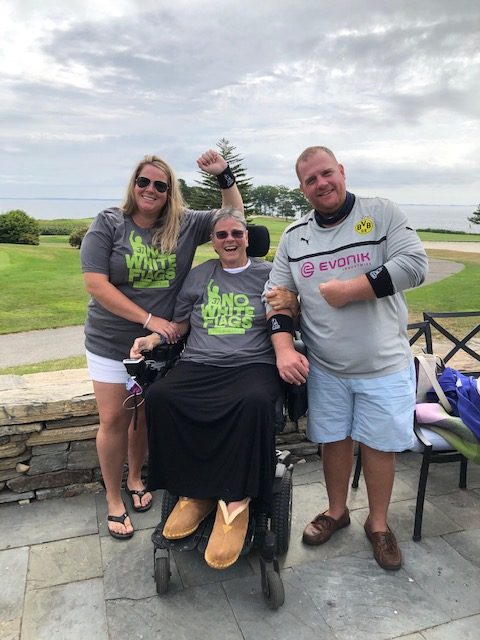 The trip had a rocky start. Despite going to the hotel a month before the wedding to pick a room that was accessible and that her caretaker would be in the connecting room, they put her in the wrong room.  The massages that she had booked for her and her daughter had disappeared from the reservation book. Theanna says that because she has ALS, she thinks that someone higher up in the hotel had to confirm that it was ok.  But that confirmation never came.

But the resort was able to move her to the right rooms.  They brought in a masseuse at 7:30 a.m. on a Saturday so that the bride could get the massage that her mother promised.  And the day of the wedding it was a beautiful 75 degrees and sunny on the picturesque Rockland Harbor with the light house in the distance. 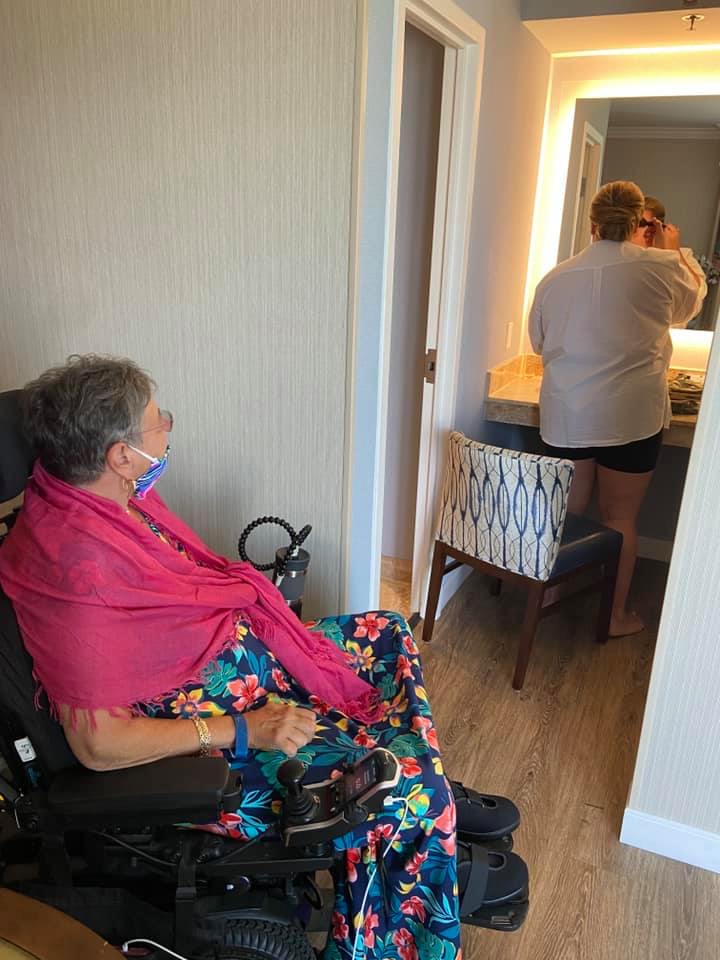 “She drove up with us Friday and we had dinner together with Sarah and Jake, his family, her father and his wife. We had breakfast. And then we hung out at the pool all day and had lunch at the pool.”  Theanna was able to get ready in her own room, and then be with her daughter as she was getting ready for her big day.

The ceremony was beautiful. It was small, the group small because of Covid-19 restrictions.  It was a far cry from the 200 person wedding originally planned. But, with so few people everyone was able to relax and enjoy the day.

Theanna was delightfully surprised when Jake, the groom, included her in the wedding vows.  Leading up to the wedding, Theanna used her training as a psychologist to talk to Sarah and Jake about their relationships.  In marriages or lifetime relationships, there is an opportunity to grow together, to heal past wounds or just become people that they could never be by themselves. Two people coming together can become better individuals because they have each other.  Jake spoke about how much he had learned about relationships through their conversations and that one of his vows was to grow together with his new wife.

During the reception, everyone was able to spend time together.  Theanna was thrilled to be able to make a toast.

“I thought about my speech for a couple weeks. I mulled It over in my mind about what I wanted to touch on. And when I spoke I just spoke from my heart.”

The next morning, they were all able to eat breakfast together.  Theanna said that if the wedding had been as big as originally planned, there was no way that she would not have been able to spend as much time with her daughter as she did.

“It’s a memory that will last forever. Just so special and so beautiful.”

The couple are planning to have their big reception with all of their friends and family as soon as it is safe. 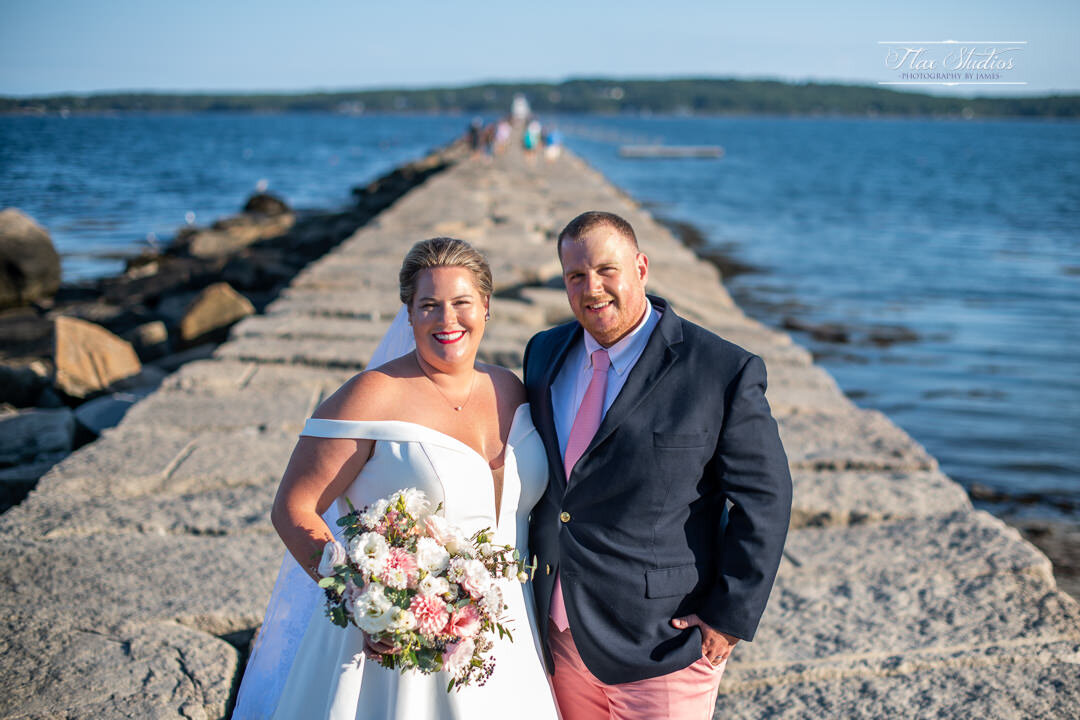 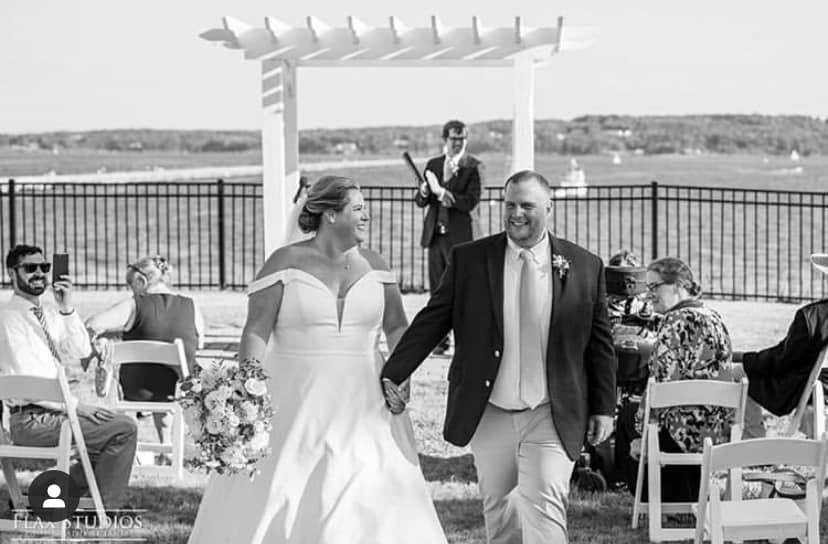