From adversity, heroes are born.

In January, 2011 Steve was diagnosed with ALS, considered a terminal neuromuscular disease. Beyond his faith that there is a solution to heal, it is his mission to show that patients can not only live but thrive after this diagnosis. In doing so, he hoped to inspire others to do the same. With that in mind, Steve and his wife, Michel, formed “Team Gleason” to help him accomplish those goals and more.

Steve’s story and mission have been told countless times throughout the media and in a soon to be released documentary. The NFL Network, ESPN, HBO, ABC, CBS, CNN and many local out-lets have all been inspired to share the Team Gleason story in many ways. He was featured in 2 Peter King interviews during Super Bowl pre-game shows, NFL’s A Football Life, Good Morning America, HBO’s Real Sports and more.

He was named one of 2 Sports Illustrated’s Inspirations of the Year in 2014 and been a keynote speaker for Microsoft and at 2 United Nations sponsored Social Innovation Summits. Steve was the featured personality on the highly praised and reviewed Microsoft commercial during the 2014 Super Bowl with over 3 million views since airing.

As an advocate on the national stage, Team Gleason has brought ALS to the forefront. In 2015, both the US House of Representatives and the Senate unanimously passed “The Steve Gleason Act” to ensure the availability of life sustaining communication devices. The Act was signed into law on July 31, 2015, but had a 3 year sunset. In 2018, the Steve Gleason Enduring Voices Act was submitted to replace the original law and passed in February.

Steve has led the charge in innovative assistive technology.

Steve’s film, ‘Gleason’ was released to outstanding reviews. The film was heralded at the Sundance Film Festival and premiered across the country to equally impressive reviews. Variety called the production, “an emotional powerhouse” and reviews continue to echo that sentiment as the film becomes widely available. The film was shown in theaters across the country, streamed through major services, and was in the top 15 films considered for 2016’s Academy Awards.

With one of Steve and Team Gleason’s focus on life-sustaining and enhancing technology, Steve has led the charge to help innovate for and promote innovative assistive technology. In 2015, Steve challenged Microsoft to create a method for people who are completely paralyzed to navigate their power wheelchairs with their eyes. Not only did the tech giant complete the request, Steve, Team Gleason, and others are working collaboratively to make the technology widely available to all who need these liberating devices. As a result of Steve’s inspiration, Microsoft has also made eye-tracking technology part of all Windows 10 products across the globe. Access to this technology with the most used operating system in the world speaks volumes to the impact Steve’s challenge has had.

In addition to Steve’s focus on technology, equipment, and adventures, Steve and Team Gleason hosted a Summit in New Orleans in 2014. Leading researchers met with patients, caregivers, and all ALS stakeholders for the first time in a single meeting. The call to action was to “think differently” and create a plan to ultimately end ALS in our lifetime. The result was what is now recognized as the single largest coordinated and collaborative ALS research project in the world, Answer ALS. Nearly 2 dozen institutions, 1,000 patients, and 20 trillion data points are key to the project that will define the unknown pathways that will lead to treatments or finally a cure.

But, the most signiﬁcant accomplishment for Steve and Michel since Steve’s diagnosis was their decision to have children. In November 2011, Rivers Gleason was born and their daughter, Gray, was born in 2018. When Steve was diagnosed, he famously said there will be “No White Flags”. This has become the Team Gleason mantra, but it is most important when applied to Steve as a father. No goal is more important to Steve and Michel than ﬁnding a solution for ALS, so they can share many, many years together and as parents to Rivers and Gray.

On January 15, 2020, the U.S. House of Representatives and Senate united in bicameral fashion, and joined with presidential approval, to recognize Steve with the U.S. Congressional Gold Medal, the nation’s highest civilian honor, for his work as an ALS advocate and an icon of hope through adversity. 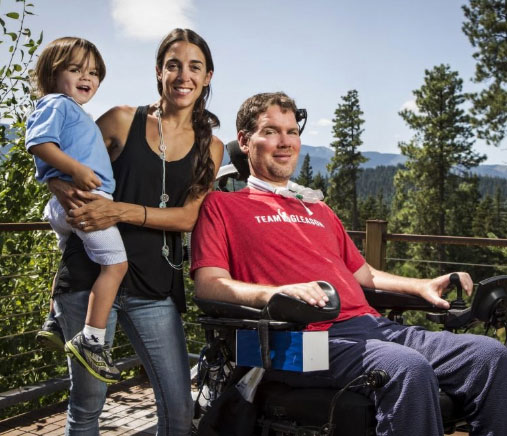 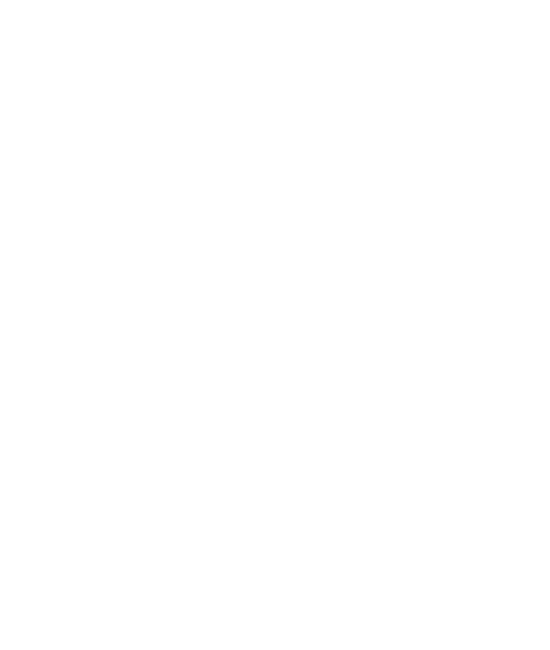 Team Gleason is committed to providing for and finding solutions for persons living with ALS. Team Gleason’s staff and volunteers work tirelessly every day to empower those living with ALS to live with continued purpose and as productively and independently as possible.
Team Gleason is a recognized charitable 501c3 non-profit corporation with the mission to improve life for people living with ALS by delivering innovative technology and equipment, as well as providing and empowering an improved life experience.
Since Team Gleason’s inception, we have made a significant impact on the lives of countless people living with ALS. While the organization has spent millions of dollars providing equipment, technology, services, care, and life-changing adventures, the impact of goes well beyond our mission. In 2015, the Steve Gleason Act was signed into law, ensuring access to all people who need assistive communication devices. In 2018, the Steve Gleason Enduring Voices Act was passed to replace the original law, which made the devices eligible for Medicaid and Medicare reimbursement.

In one of Team Gleason’s first meetings, Steve declared,

“There Will Be No White Flags.”

He meant it and so do we.

Steve and Team Gleason continue to push the boundaries of what is possible in living with ALS. Whether it be partnering with the world’s largest tech companies, challenging legislation, innovating for new technology or creating life-changing experiences, the group strives to find solutions where others see only problems.

“I believe my future is greater than my past.” 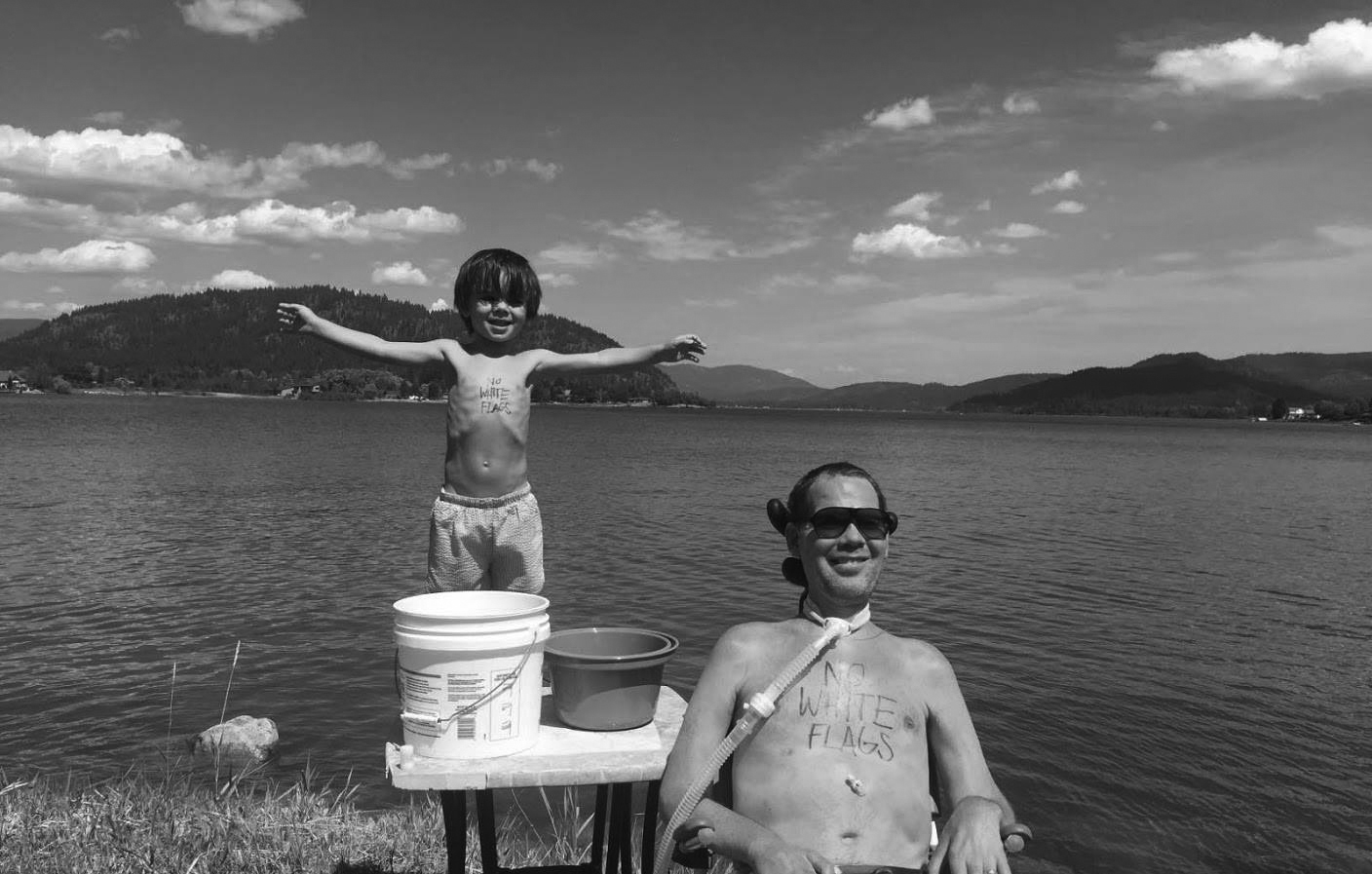