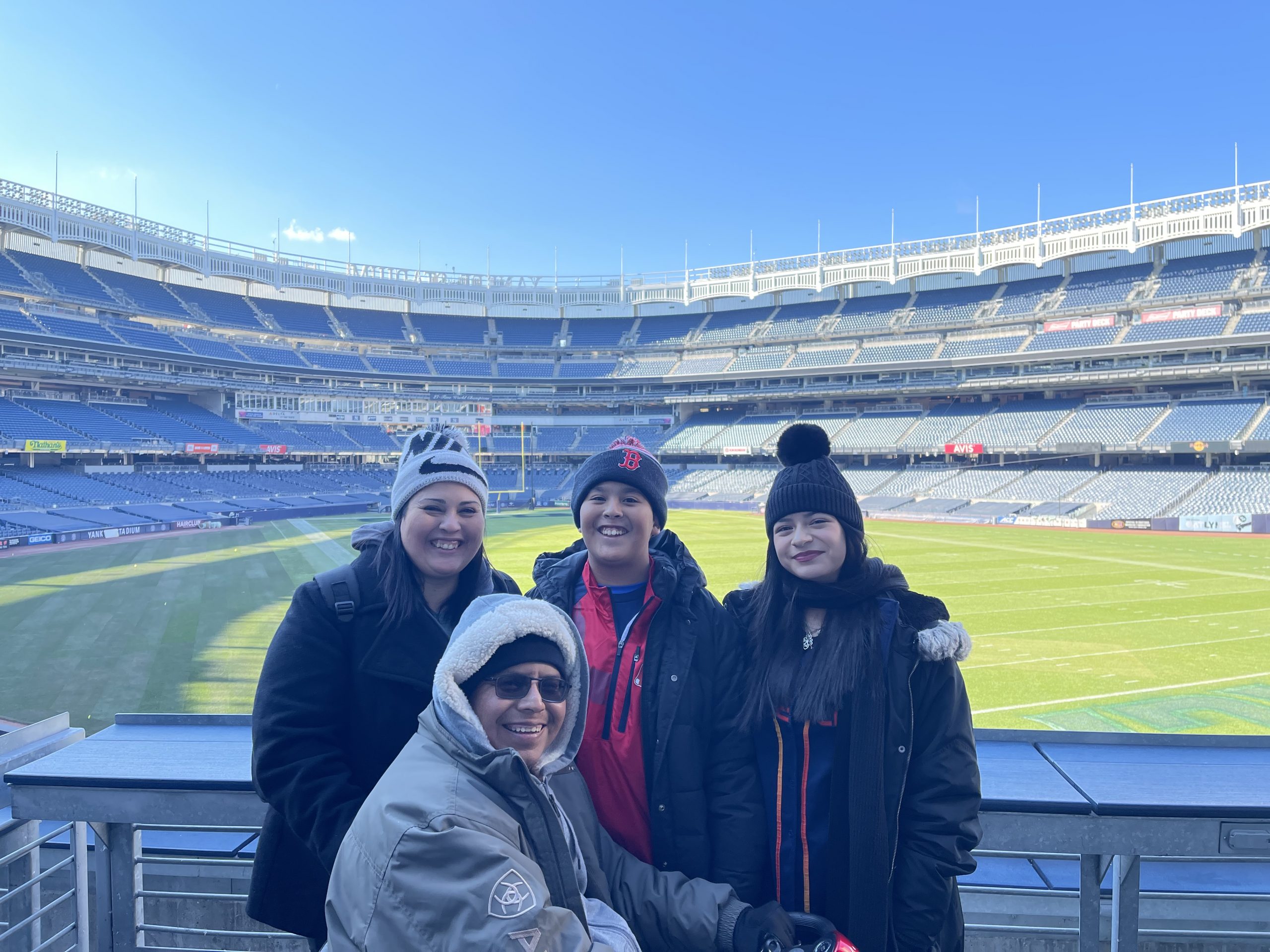 On behalf of our family, I want to say thank you to Team Gleason who made this Adventure possible. I have no words to describe the happy faces of my husband, my son and my niece throughout this Adventure!

Since Jaime, Sr. was diagnosed, this was the first time we have traveled far as a family. We flew from Houston to Boston. The Hampton Inn & Suites Boston Crosstown team helped us a lot when there were no Uber or accessible taxis. They looked for transportation for Jaime, Sr., having them load the scooter in the trunk because the cars did not have ramps. They were all very friendly and attentive.

Baseball has been the point of union that has led us to seek encouragement throughout my husband’s illness.

My husband usually doesn’t enjoy leaving the house unless it is for one of my son’s baseball tournaments. Both my husband and my son love the game.

My husband is a huge Astros Fan and my son is a Red Sox fan. We visited three baseball stadiums on the trip: Fenway, Citi Field and Yankee stadium. 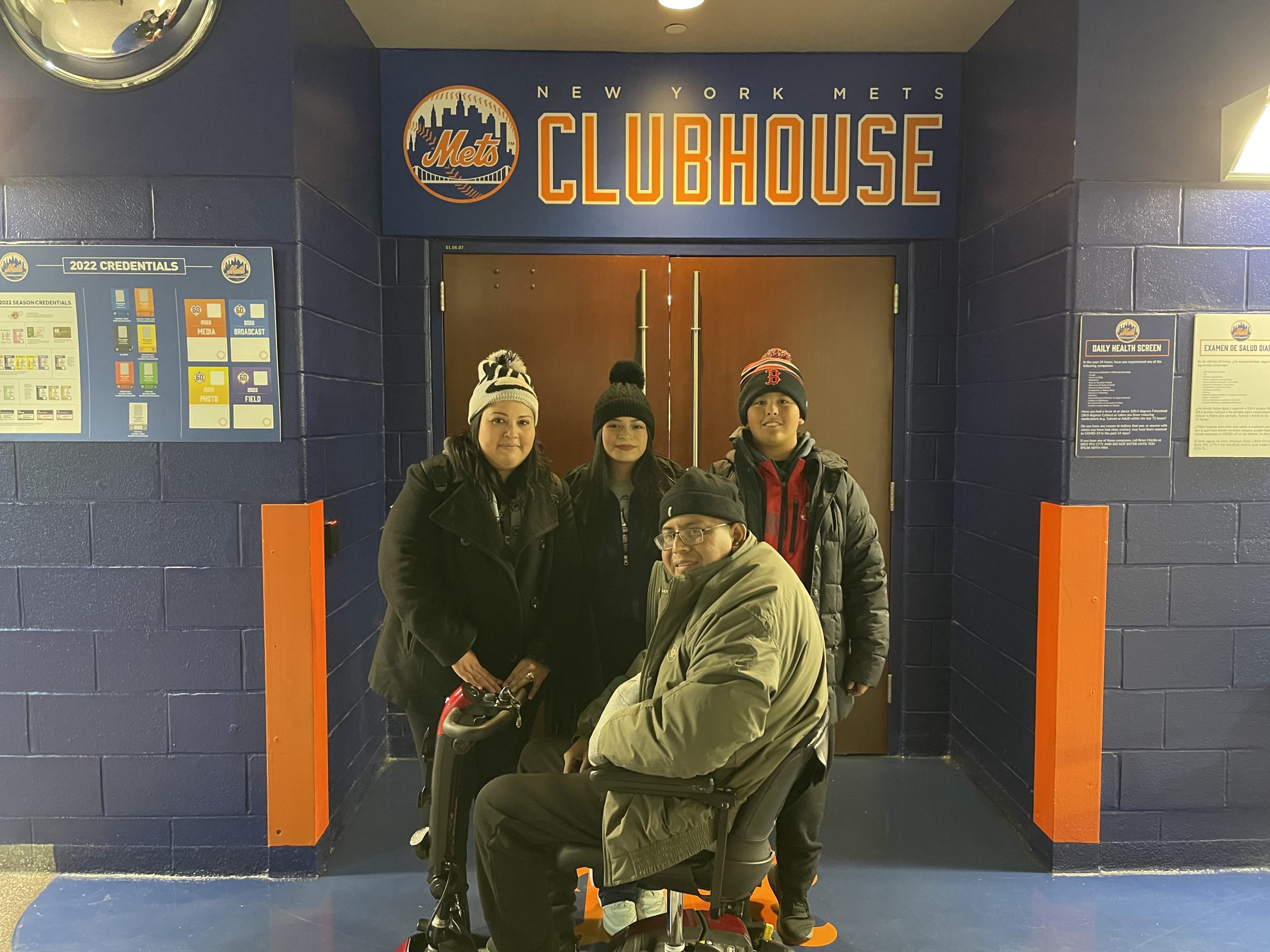 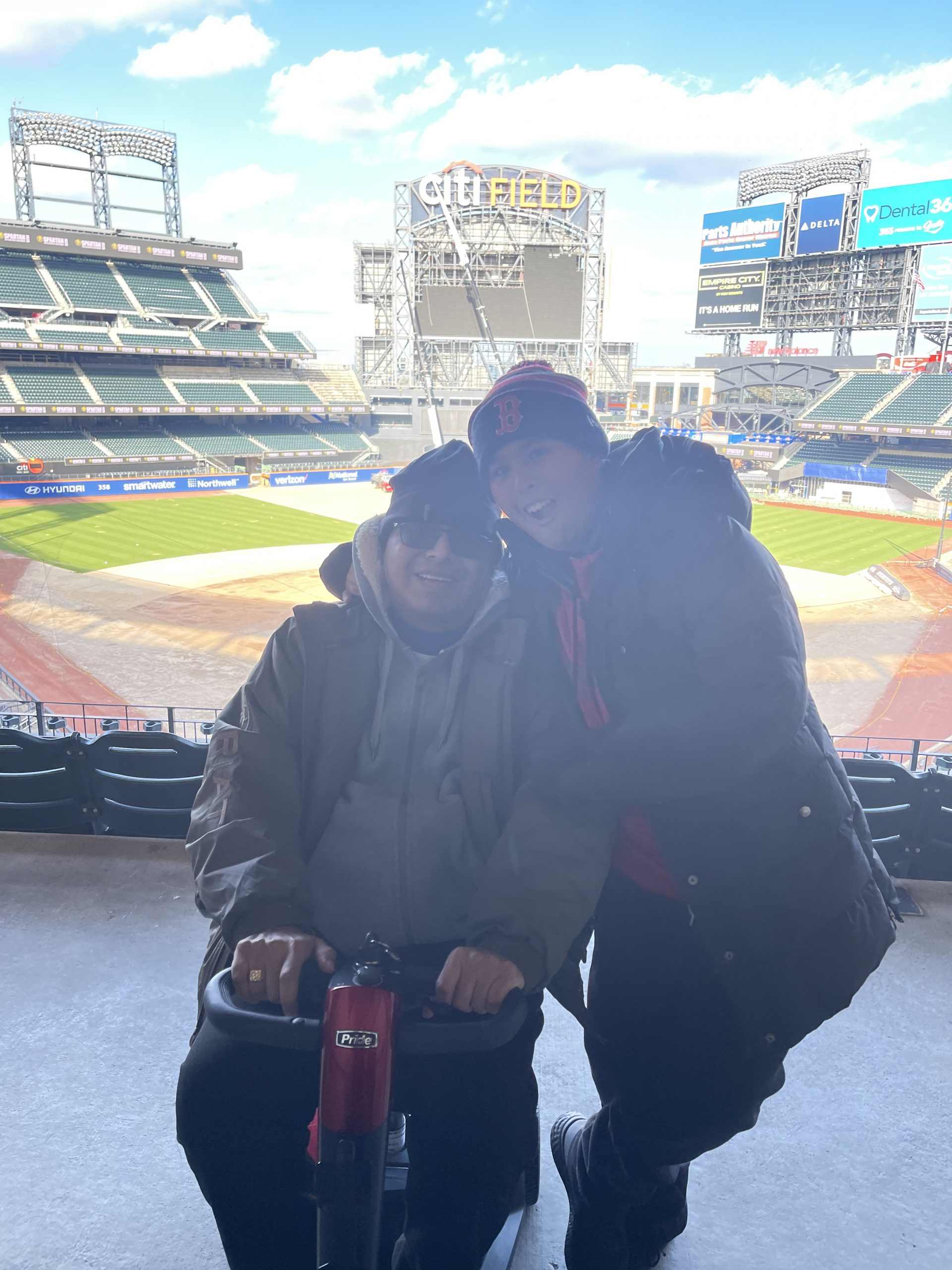 From Boston, we traveled to New York by train, and Amtrak is definitely one of our favorite modes of transportation. It was very comfortable for Jaime, Sr. to get on and off the cars, and change from his scooter to the seats.

The Amtrak staff also helped us at all times.

Our second stadium to visit was CitiField.

The Mets have a very modern stadium and we were able to enter the club house and the dugouts, seeing each space where the players prepare for a game was incredible.

Visiting Fenway was like traveling back in time. It is the oldest stadium in the MLB and walking through the halls you feel like a part of history. During the tour the scooter stopped working and we had to push the chair, but that didn’t stop Jaime from enjoying the visit.

The entire stadium has ramps and accesses that allowed us to visit each of the important points in the stadium.

As a Boston fan, my son was in baseball heaven, looking at all the past and current player memorabilia, knowing his two favorite baseball players,

David Ortiz and Kike Hernandez, played on that field. He had the opportunity to step on the same field and that was awesome for him. 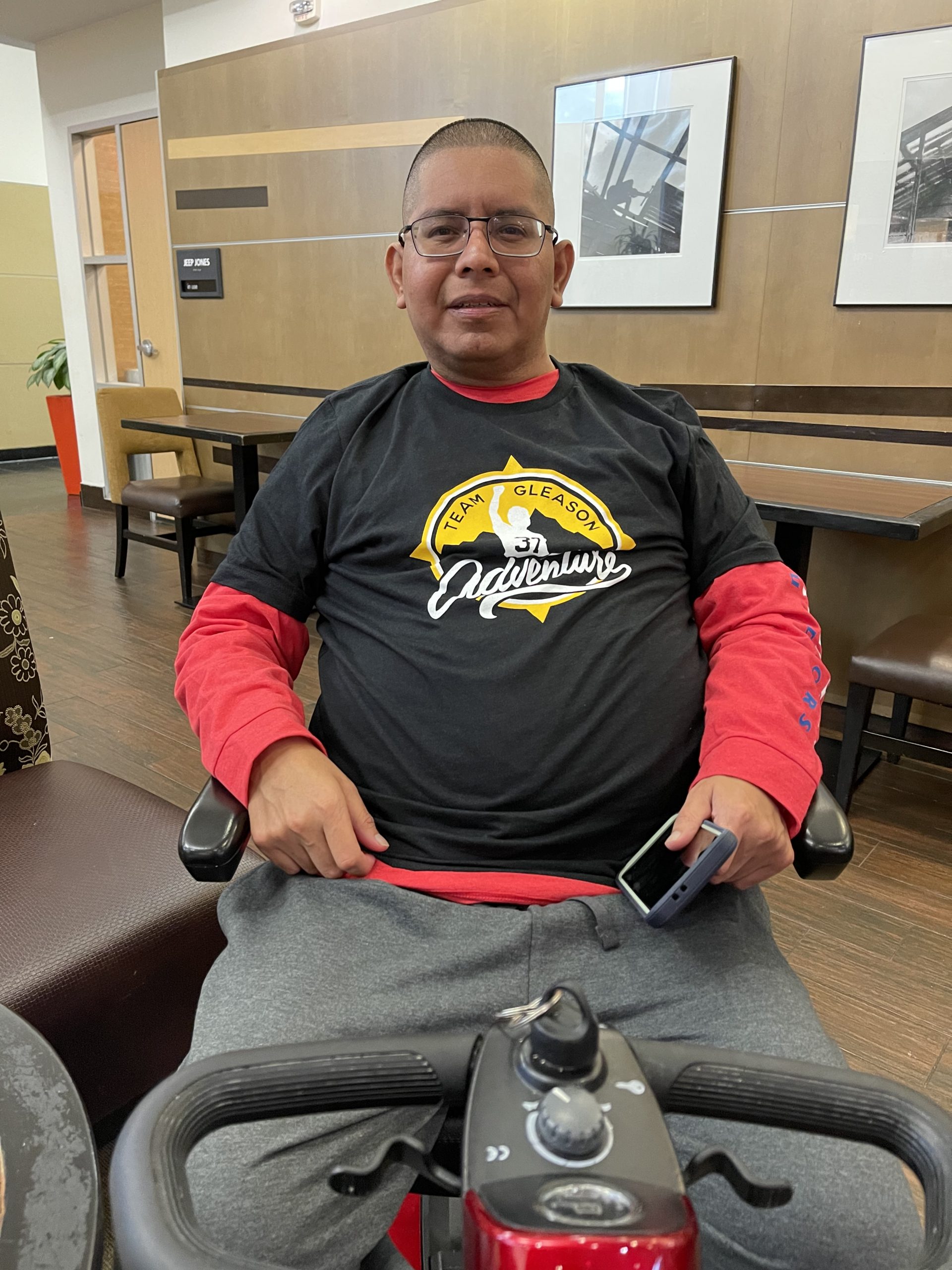 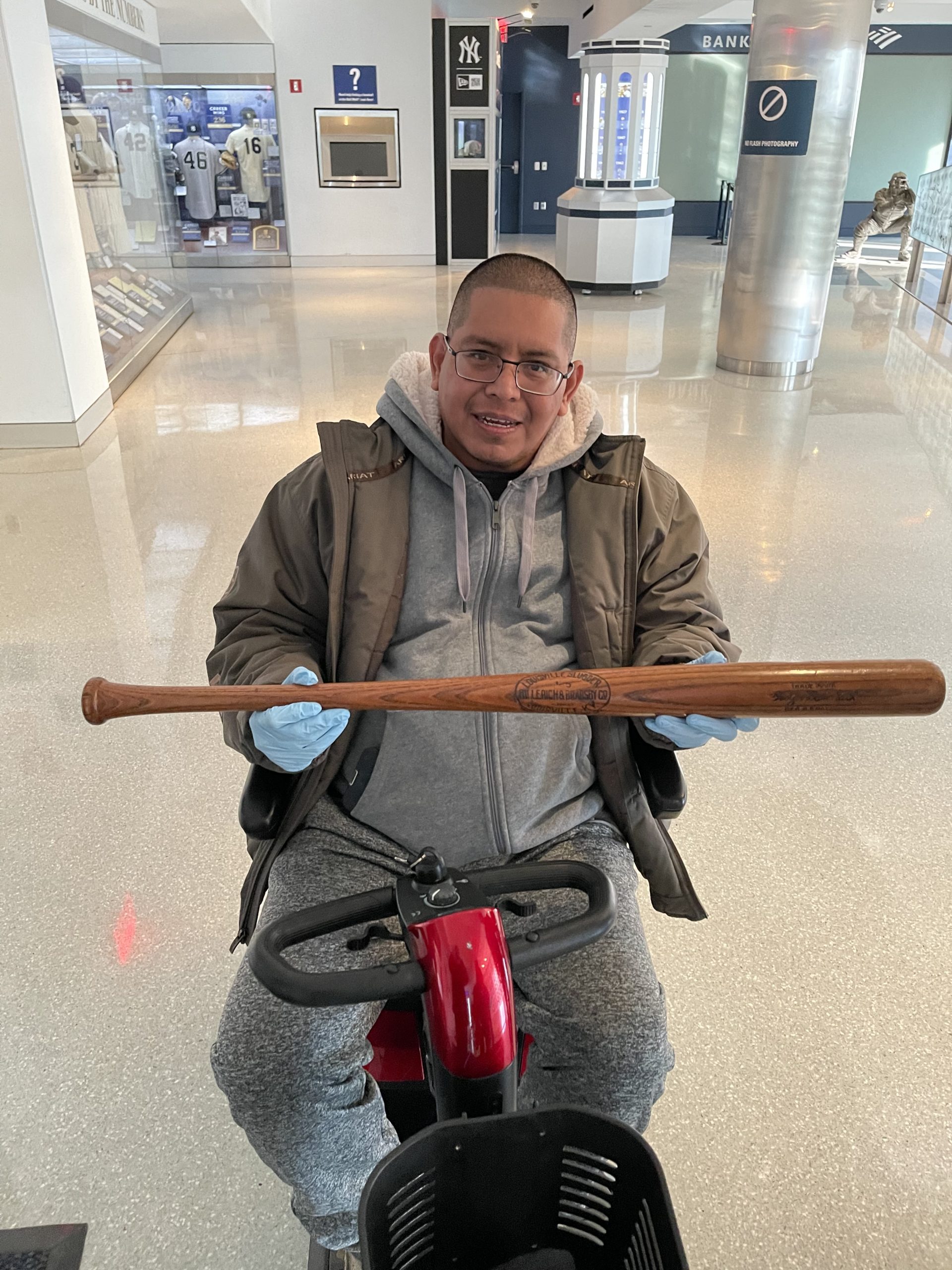 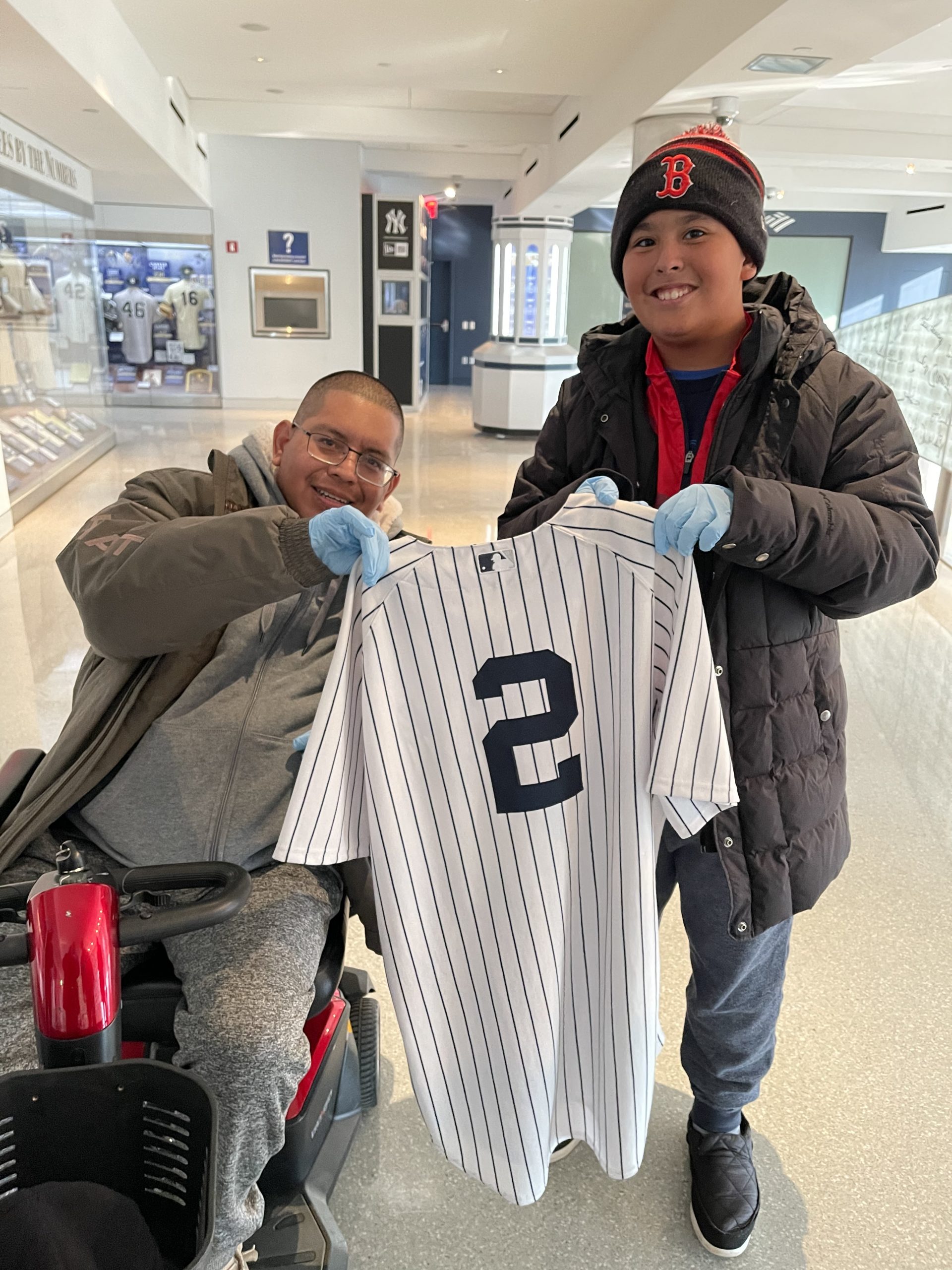 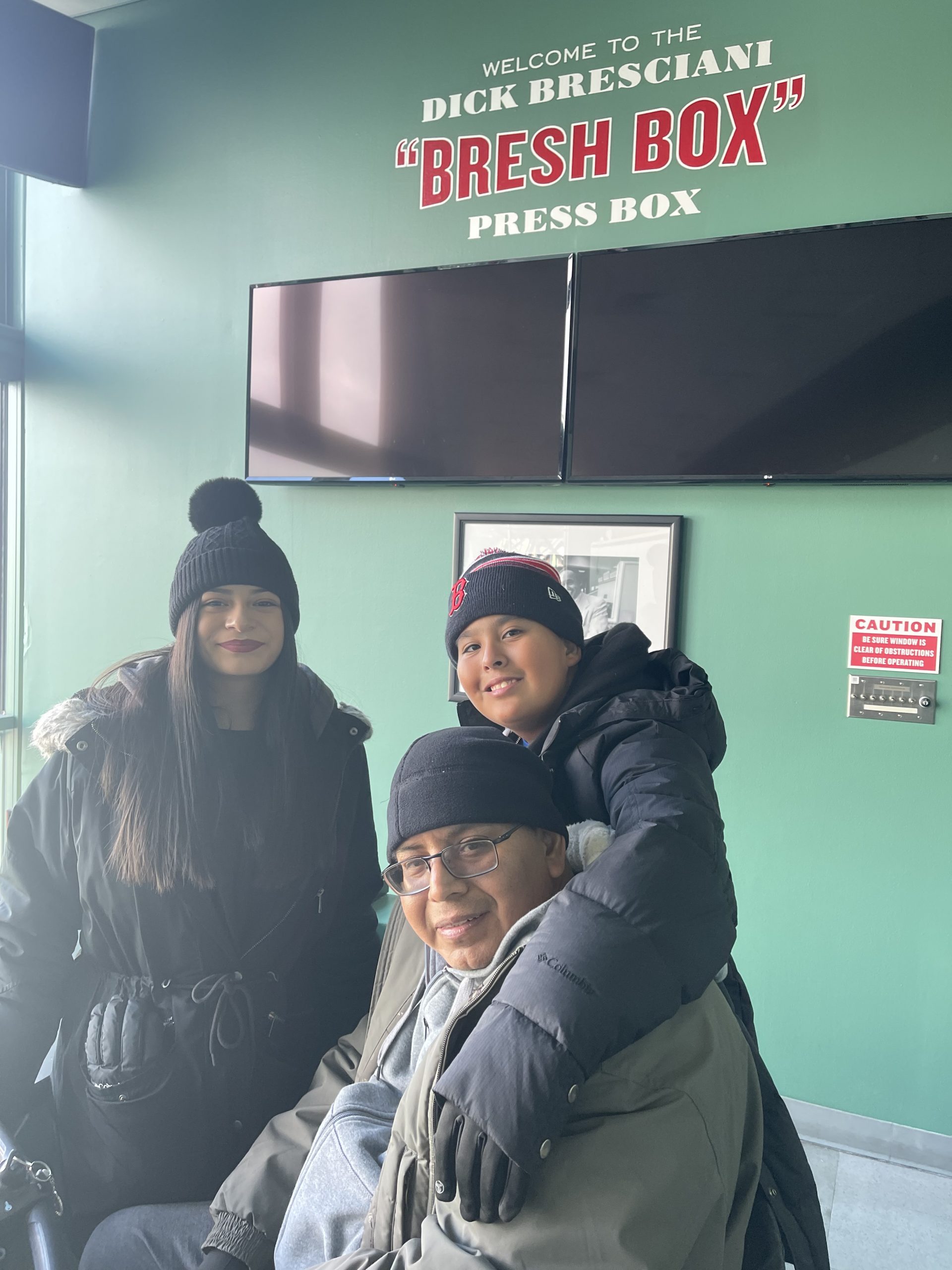 But, the crown of the adventure being Astros and Boston Fans is Yankee stadium. Visiting this stadium and the history it holds as this was the home of Lou Gehrig, who also suffered from ALS, seeing all the memorial that the Yankees had dedicated to Lou and his legacy was amazing.

It was so inspiring for us to hold the bats of “The Great Bambino” Babe Ruth, the best player of all time, and Judge, the best hitter of the Season. 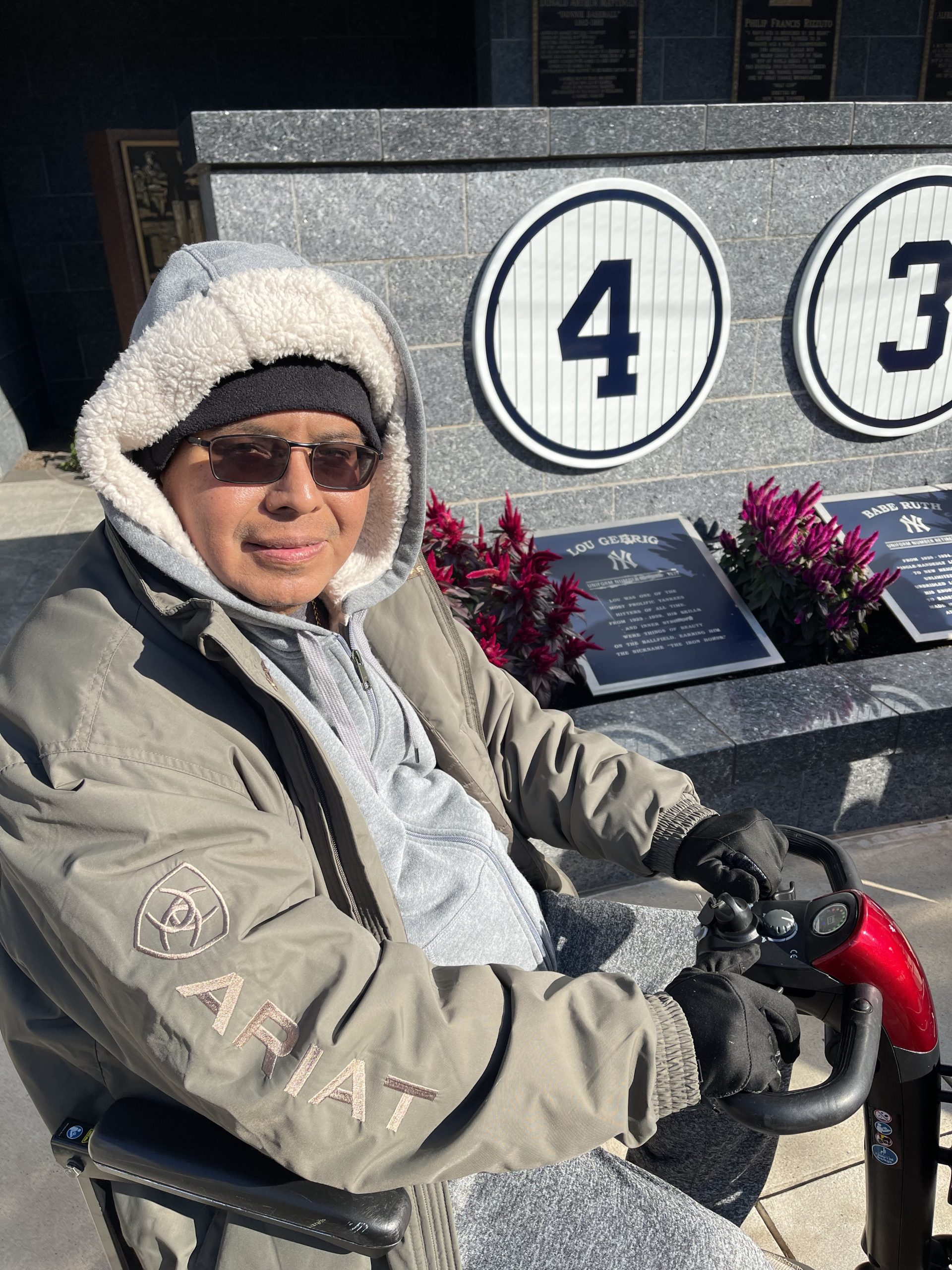 Every adventure has its challenges. But, even though the scooter was damaged by the airline, we rented one and fixed the situation. Also, finding our way on the subway was an adventure in itself.

Central Park was a success even if Jaime, Sr. ran away from us while we were taking photos at Wollman Rink. Jaime, Sr. just went and left us because he’s not a fan of photos and he didn’t want any more photos. He left on his scooter alone and we were searching for him for 30 minutes in the park. The man was very calm having a hot drink in front of the Plaza Hotel, because he remembered that one of his favorite movies as a child (Home Alone) was filmed there and he wanted to see the place.

We said goodbye to New York City by visiting the Statue of Liberty and taking a moment of silence in memory of all the lives that were lost on 9/11 while visiting the memorial.

The TSA team at the airport also was amazing. As soon as we arrived at the airport I called them and they met me at the door. They opened a line just for us and helped us pass by security with Jaime and his scooter. There were no lines and the security check process was very smooth. 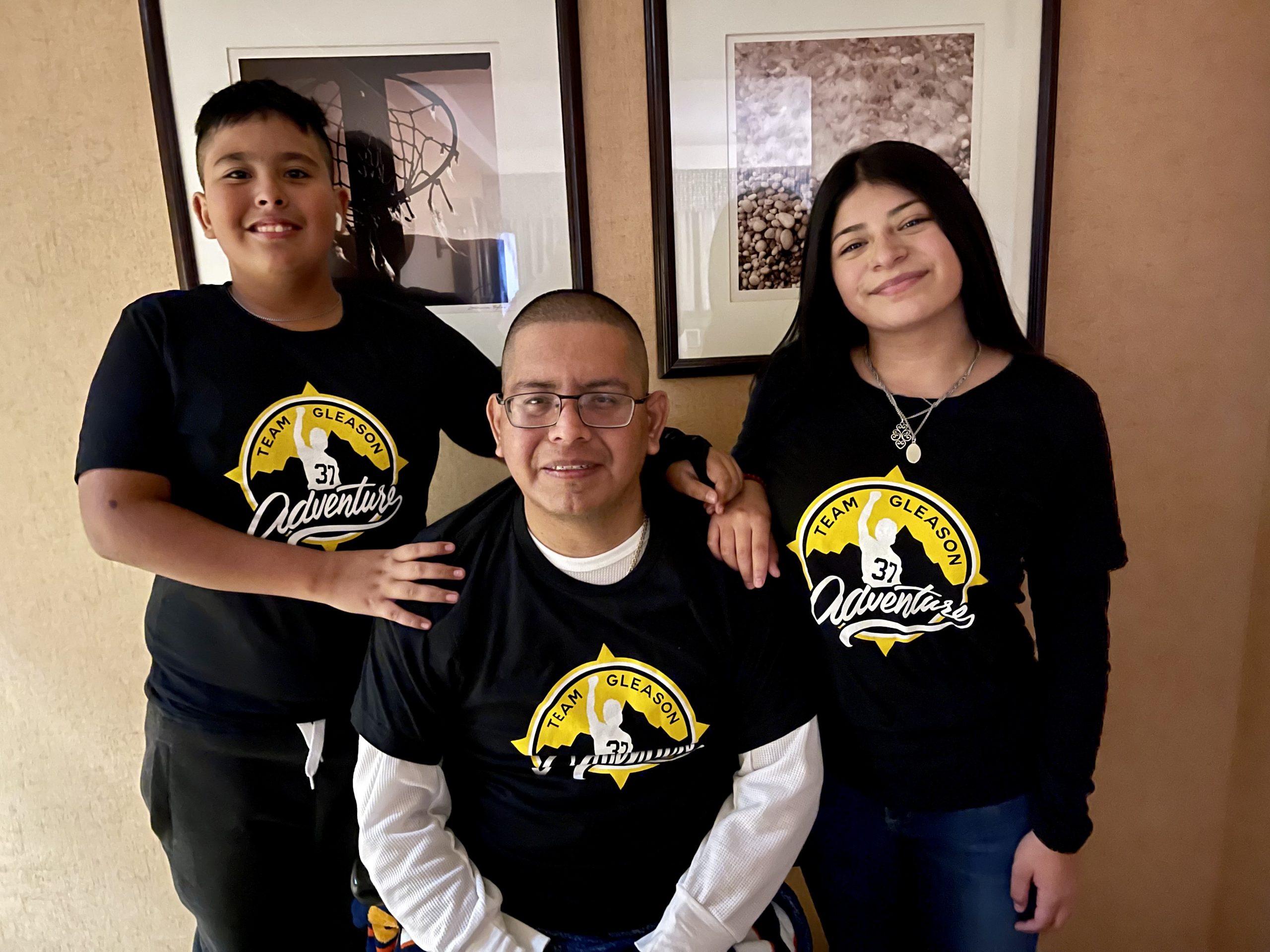 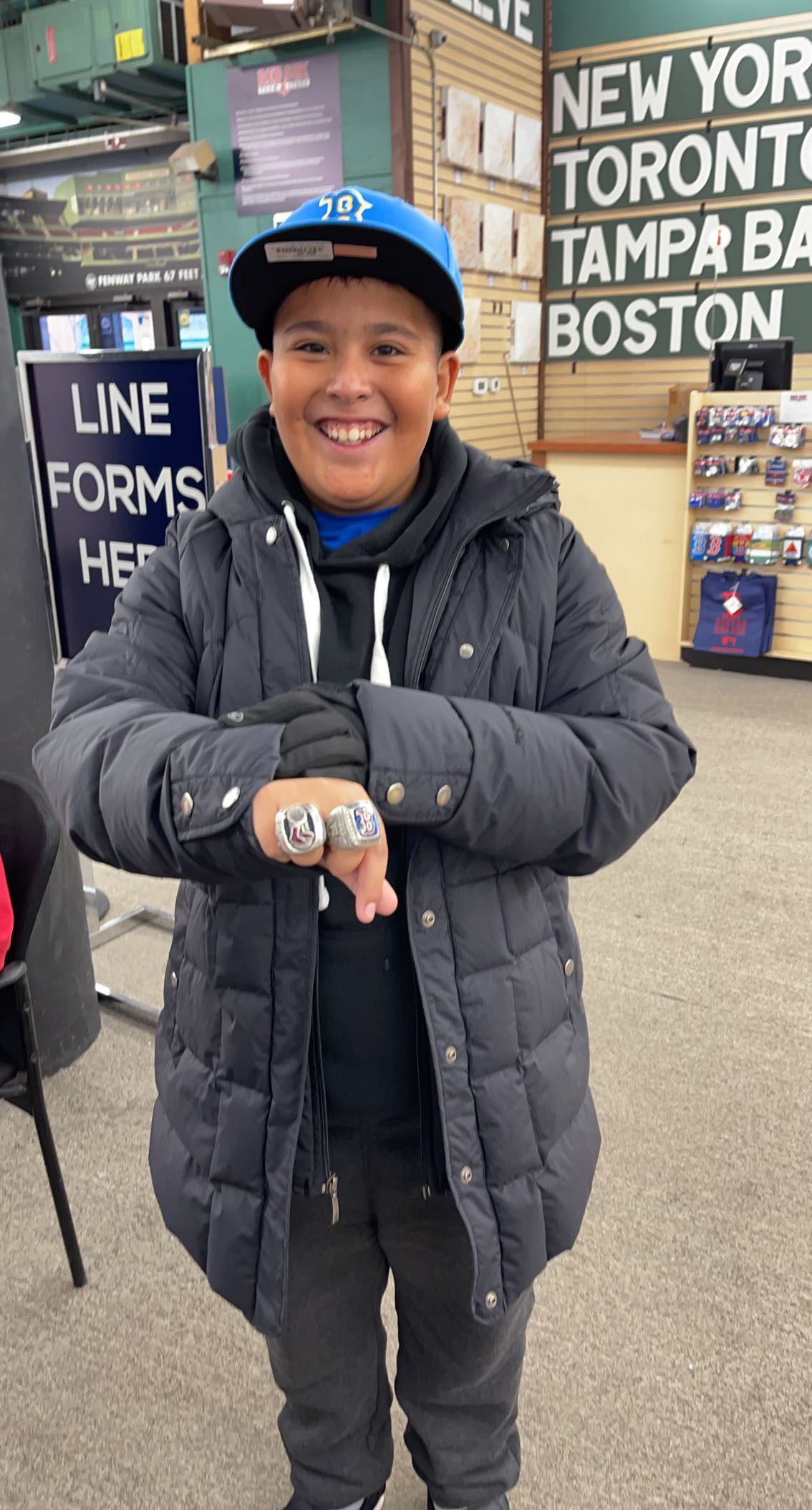 This trip was just what we needed to make my dad more happy. I know he sometimes gets sad, because he can’t do or share things with me like other dads do. But, baseball is always something we share. He was the first person to show me how to hold a ball but the most important thing he showed me was to love and respect the game.

Having the opportunity to visit the stadiums with him and share all the memories made my heart full of hope, because I believe he will get better to share more memories with me.

I loved the 3 stadiums, but as a true Red Sox fan, having the opportunity to see the green monster on Fenway and being able to touch a Babe Ruth bat at Yankee stadium was the most extraordinary part (every Red Sox fan knows that Babe Ruth was first a Red Sox player before he changed on us for the pinstripe uniforms).

Thank you for giving us the opportunity to create all these memories.